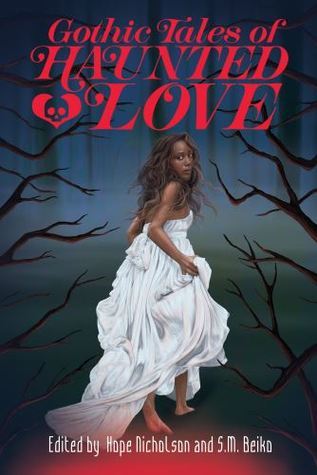 Gothic Tales of Haunted Love is a new comics anthology curated by Hope Nicholson (The Secret Loves of Geek Girls) and S.M. Beiko (Scion of the Fox).

In 1950s Vietnam, a lost soul comes to the aid of his lover’s field under attack by American troops.

In Victorian Boston, a new governess comes to care for the rogueish widower of a stately manor and his charming brood of children.

A fashion journalist lands the interview of her dreams – but it unearths the deadly secrets of Taiwan’s most popular fashion designer.

A Sioux elder revives a recently deceased woman who sets out to recover her lost love.

A Jamaican slave faces the horrors of her hateful mistress, on the eve of her liberation.

A Brazilian writer-in-exile discovers the dark history of an abandoned mansion inhabited by a charming and sensual ghost.

And a young bride spins a story of murder and deceit that paints her husband as a killer . . . but is there any truth to her tale?

A foreword on gothic romance comics is provided by historian Jacque Nodell, and the collection also features a reprint of the 1970s Korean horror-romance comic “The Promise” by Sanho Kim.

I generally have mixed feelings about anthologies, but when I got an email offering me a free copy of Gothic Tales of Haunted Love, I couldn’t resist. After all, I’m on a huge graphic novel kick. Reading something that was at least a little out of my comfort zone didn’t sound so bad, either.

As usual, I had wildly varying thoughts about the stories in this anthology.

I was getting some Sound of Music vibes from this one, and even half-expected some clothes made out of curtains, until the end. I did not see that ending coming!

I wasn’t loving this one at the beginning. I thought it would go the very cliche way of Jim ending up as the villain, and I’m glad he didn’t. That ending, though, totally saved this story. My goodness!!!

This one was so much fun! Or, at least, as fun as murderous mayhem can be…

I thought this story was cute, but the twist was (1) much less exciting than the previous three stories and (2) honestly kind of obvious.

I feel kind of bad, but I did not understand the point of this one. Like, at all.

This is primarily written in Vietnamese, so I’m not 100% sure that I fully understand what was going on, but it made me very, very sad and I’m calling that a success.

An interesting enough premise, but the execution was pretty cliche. It basically just followed every fable ever.

The art was great and the story was heartbreaking, but what exactly was the point? I feel like this was too big of a story to tell in this short amount of pages and it would have been improved a lot if it were at least twice as long.

Ladies of the Lake by Sarah Winifred Searle: ★★★★☆

I love twists on Arthurian legends, so this one was right up my alley. I fully expected that final twist, but still appreciated it. This one was a great story.

There are some definite plot holes here when it comes to the ghost’s appearance (and actions), but I still enjoyed this one. Surprisingly, even with the torture and war and everything, it was pretty cute.

So, first of all, I’m not a doctor but I don’t think you get Graves disease from walking around at night. That said, this one had an interesting twist, and I loved the conversation between Andrew and John.

Another twist I didn’t see coming! I was already on board with the idea of the main character recounting her dream, but that twist really took it to another level.

My Heart Still Beats for You by Amber Noelle & Allison Paige: ★☆☆☆☆

I’m sorry, but is this the novelization of every text post from 2009 Tumblr?

I was 100% on board with this until the end. These tragic, supernatural love stories are just not my thing.

Not sure what’s up with all of these dramatically emo stories all of a sudden. This honestly reminded me of something that one of my more dramatic friends would have tried to convince me was amazing back in like… 2004. It’s everything she used to find on Xanga and covertly print out in the school’s computer lab. It wasn’t my thing then and it’s still not my thing now.

I Am the Song by Cecil Castellucci, Willow Dawson, Becka Kinzie & Zakk Saam: ★☆☆☆☆

What… in tarnation. There was no point.

Interesting art style. Odd storyline. But above all else, this was entertaining.

I can’t really say that this is my favorite story that I’ve ever read, but I have to say that the soldier really got what was coming to him.

I have never not loved something by these authors.

Have you read Gothic Tales of Haunted Love? Have you read any other graphic novel anthologies? Let’s talk in the comments!